When building a personal computer (PC), many people focus on acquiring the ideal CPU or graphics card, often overlooking the paramount importance of a CPU cooler.

Yet, CPU coolers should not be underappreciated, as these devices are critical for optimizing the temperature of your machine as well as its longevity.

In this article, we discuss the 7 best CPU coolers currently available. Within each section, we give a brief overview of the product we selected and explain why it’s one of the best products available. Towards the end of the article, we offer a buyer’s guide for potential customers as well as our final thoughts on CPU coolers.

How We Chose Our Ratings

When selecting the 7 products you see below, we analyzed a combination of affordability, performance, durability and feature set.

We also closely inspected customer reviews, weighing these highly when making our final selections. If any product we were researching received consistently bad customer reviews, then we no longer regarded that product for this list.

While these CPU coolers represent the cream of the crop, that are some relative differences worth noting that we have highlighted using a 5-star rating system. We also make sure to note any drawbacks when relevant, as we think this makes for a more balanced review. 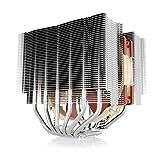 The NG-D15S CPU cooler from Noctua can be purchased on Amazon for $$.

This product is the newer version of the NH-D15 model, providing better heatsink performance and better RAM compatibility than its predecessor. Furthermore, the newer NH-D15S has an asymmetrical design that boasts a single fan as opposed to the dual fan of the NH-D15.

This CPU cooler is unique due to the presence of recessed lower fins. This provides 65mm worth of clearance to support tall memory heatsinks, ultimately allowing it to be compatible with the majority of modules that users are employing.

This CPU cooler is highly lauded for its flow acceleration channels, as this advanced aerodynamic design makes this one of the best 140mm fans on the market.

What’s significant about this product is that it can be upgraded if users want a second fan. Using extra fan clips, customers can upgrade with another round-frame 140mm fan or a more traditional 120mm fan.

A low-noise adaptor comes with this product which allows you to reduce the max fan speed from 1500 RPM to 1200 RPM. This is a significant feature, as many inferior GPU coolers are so loud that they become counterintuitive. One of the main points of integrating a GPU cooler into your machine is to enhance your computer experience, most often for gamers.

If the fan that you’re using to achieve this enhancement ends up detracting from your experience, then you might be better off getting a different cooler.

You don’t have to worry about that with this cooler. Many customers have lauded this fan for dovetailing well with their gaming experience. In fact, 97% of the 185 reviews on Amazon have given this product either 4 stars or 5 stars out of 5. That represents near-universal customer satisfaction, which is always a telling indication about the quality of a product.

The Kraken X62 CPU cooler from NZXT can be purchased on Amazon for $$. This is a 280mm liquid cooler that is often lauded for its combination of affordability and performance.

NZXT is one of the first companies to manufacture all-in-one liquid coolers. They have especially innovated within this industry recently, as the Kraken X62 was only released 2 years ago. Since that time, it has garnered quite a following due to its superior performance over many CPU coolers.

Many customers love this cooler due to the RGB lighting that is built into its pump. Customers can use NZXT’s Cam software to control the specific lighting effects that are displayed, allowing them to make their PC more an extension of their personality. While most users integrate a CPU cooler into their PC in order to enhance its performance, the aesthetic of your machine is also an important consideration for some gamers. 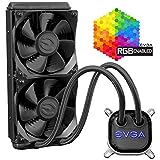 The CLC 240 from EVGA can be purchased on Amazon for $$. This is a liquid CPU cooler which has a 240mm dual fan radiator as well as RGB lighting effects.

Many customers seek this product because it’s so affordable when compared with other products from competitors. For under $, customers can get a product that rivals some of the best in the industry.

This product also has a relatively loud fan. That might be its one drawback, though this loudness is only notable when the cooler is running at full speed.

EVGA offers a number of similar products, like the CLC 280. However, we think the CLC 240 model will be most appealing to customers on a budget due to its price point. You’d be hard-pressed to find a similarly priced product that offers the same level of performance and durability as this cooler.

If you thought the previous cooler from EVGA was cheap, then take a look at the specs on the Corsair H60.

For only $$, customers can benefit from a liquid cooler with a 120mm fan and a 120mm high-density radiator. This product also comes with a white LED-illuminated pump head which enhances the aesthetics of your machine.

This cooler is compatible with all modern Intel and AMD sockets.

The fan on this cooler has a speed range of 600 RPM to 1700 RPM which can be adjusted to minimize noise or maximize airflow.

It’s also worth noting that this cooler has a thermally optimized cold plate which maximizes the efficiency of its cooling. This also helps keep the noise down when you’re gaming, which could enhance your experience.

Okay, we’ve outdone ourselves again when it comes to affordability. This CPU cooler from Cooler Master only costs $, making it the cheapest cooler on this list.

Yet, this product is clearly highly lauded, as about 85% of its 9400 customer reviews have given the product 4 or 5 stars out of 5. This feedback is likely due to the combination of price and performance this cooler offers.

In particular, this is one of the best coolers available due to its 4 Continuous Direct Contact (CDC) heat pipes. These are packed into a flat array on the CPU cooler base which allows large amounts of heat to dissipate.

The main drawback of this CPU cooler is that some customers have described it as difficult to install. If this is your first time installing a cooler, then this might not be the ideal product for you. Additionally, due to its large size, this cooler only fits in oversized cases. Some customers have noted having to cut a hole in their case in order to make this product fit, which is clearly not ideal.

The Floe Riing 360 is an all-in-one liquid cooler that can be purchased on Amazon for $$.

Despite its high price tag, this is one of the best CPU coolers due to its 360mm radiator which provides a large surface area for heat dissipation. Many customers claim that this translates to greater efficiency and durability, as your CPU won’t have to work as hard to regulate its temperature. Ultimately, this means that your CPU will likely last longer, which helps you save money in the long term.

This product would be ideal if you are interested in controlling the lighting effects on your CPU cooler. There are 12 separately controlled RGB lights on this cooler, giving users plenty of options for influencing the aesthetic of their machine.

This cooler even supports voice-activated commands on iOS and Android devices, which makes it easier than ever to adjust the settings of this cooler.

This is one of the best CPU coolers due to its copper base plate which accelerates heat conductivity. The coolant is also pre-refilled, which prevents users from having to replenish it in the future. This is because of the low evaporation tube in this cooler which essentially minimizes any loss of coolant.

Since replenishing coolant can be a hassle, this feature is highly lauded by users who want to avoid extraneous tasks that take time away from enjoying their custom-built PC. 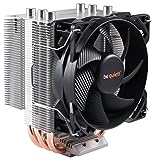 As the name implies, the Be Quiet! BK008 is one of the best coolers on the market because of how silent it is when functioning. This is critical for gamers, as every sound matters when you’re playing.

Many gamers like to get into flow while playing, as this allows them to feel and perform their best. Yet, one way of disturbing flow is by immersing yourself in an environment with many audible distractions. Customers who use this cooler from Be Quiet don’t have to worry about struggling to get into flow, as its fan blades are airflow-optimized to reduce any loud turbulence. Many customers have noted that this product is virtually silent, which is what you want during intense gaming sessions.

This product can be purchased on Amazon for $$, making it also one of the most affordable products on this list.

Lastly, due to its asymmetrical construction, this product fits well in most PC cases with limited size. This makes the cooler more versatile, as more customers can benefit from its balancing properties.

The best CPU coolers tend to be quite affordable, rarely getting above $100. Some of the most affordable are even under $40.

Furthermore, all the best CPU coolers over $100 offer significant features in order to validate their price.

For example, the Thermaltake CPU cooler we discussed might cost over $170 but it also has a massive fan that gives it superior performance when it comes to heat dissipation. If keeping your system’s temperature as low as possible is important to you, then this product would likely be ideal.

Thermaltake’s CPU cooler is also notable for offering real-time alerts if any performance issues arise. This allows you to nip any problems in the bud, which extends the lifespan of this product.

In this sense, we think this CPU cooler from Thermaltake will be the most desirable for users who are only interested in performance and don’t care about cost. However, if cost is an important factor, then the Be Quiet! Cooler or the Cooler Master cooler will be your best options. Both of these products cost less than $35 while still enhancing your computer experience.

The Future Of CPU Coolers

We think CPU coolers will continue to be popular in the future as more customers become interested in custom-building a gaming machine.

Custom-building a PC allows you to control what parts are employed as well as the performance of the system. Furthermore, it allows you to make your PC an extension of your personality, as you can finetune it to support what games you play as well as your color preferences.

Eventually, we think computers will become so small that they will be inserted into our brains. Of course, this will greatly change the gaming landscape, as gaming will likely take place behind our closed eyelids. This would make CPU coolers more important than ever, as an overheated gaming machine might cause more than just a temporary interruption to your gaming routine. Instead, an overheated machine could result in health consequences since it’s integrated with your body.