Virtual reality is a way to simulate physical environments, usually through headsets. Now enjoying virtual reality (VR) is as easy as loading an app onto your cellphone.

One of the first virtual reality machines was the Sensorama, which was developed in the 1950s. This mechanical machine offered not only 3D pictures, but body movement, sound, wind, and smell. The machine was large and required the user to sit and insert their head into the device to view the films. The Sensorama was only built as a prototype, and was never mass-produced.

Today, you don’t need a massive machine or VR box to experience virtual reality. You can go out and buy your very own VR headset. A VR headset for phones can connect with your smartphone and work with apps you can easily download.

Evo VR offers a variety of virtual reality goggles for you that work with cellphone apps. The Evo VR headset is designed to work with both Apple and Android smartphone apps. You can often use an Evo VR QR code to easily download an app to work with the device as well. Evo VR reviews are typically positive because their goggles offer so much. Their current headset offerings include:

This is Evo’s basic level VR goggle. It includes a 90-degree field of view, retractable Bluetooth earbuds, an adjustable strap, and a “magnet action slider.” The system also has support for augmented reality, which is the overlay of computer images and sounds on the real world. 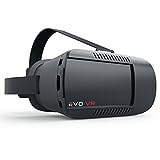 The Ultra Pro is the next step-up in VR headwear. It has an expanded field of view at 102 degrees, precision 42mm optics, and a capacitive action button. Like the Next Pro, it also includes support for augmented reality. 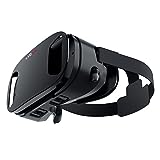 The Evo Mega Pro has all the features of the Ultra Pro with added sound quality. To provide a truly immersive experience, this headset offers surround sound headphones to really make the experience realistic. 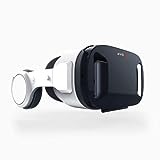 Consumer virtual reality is still in its infancy, so the number of apps available is still somewhat limited. Still, a number of interesting and fun applications are available for the gamer and VR enthusiast. Here are a few to explore:

Available for both Apple and Android, Within is not a game but a YouTube of sorts for virtual reality films. You can download any number of films to view using the app. You don’t even need a headset to view the films, as they can be watched directly from a smartphone. Of course, the experience without a headset won’t be the same. You will need to pan and move the image to see the entire 360-degree film without a special VR headset.

Virtual reality doesn’t need to be realistic or serious. You can play a cute game called Muffin Knight using your Evo VR gear. This cartoon game is about a little boy who searches for a fairy’s magical muffins. Each time he touches a muffin, he turns into a strange creature due to a curse.

This game has been honored as “iPhone Game of the Week” by iTunes, and given the Silver Award by PocketGamer for being a “leaping, blasting, clawing slice of fun.”

The game uses the Unity engine to display 2.5D graphics. The game is available on Apple and Android devices.

This app from the Discovery Channel is only available for Apple devices. The virtual reality service offers special content from Discovery’s popular shows such as Shark Week, the Deadliest Catch, and Mythbusters. Discovery also offers 360-degree videos to take the viewer on a number of exciting virtual adventures, including samurai sword fighting and swimming with elephants.

The virtual reality videos can be downloaded to the device for later playback, and a playlist option is included.

Virtual reality promises to be the future of gaming as well as movie-making. You can get on the ground floor now by exploring new worlds using your very own VR headset by Evo. With just a headset and a few choice smartphone applications, you can be exploring new worlds, playing fully immersive video games, and learning about the real world you live in on a new level.