DVI VS VGA: Which Port Has A Better Resolution? When connecting a source device to some kind of display, there are many ports that users can take advantage of.

This makes buying a connecting cable all the more difficult, as there are many different types of cables that will get the job done.

In this article, we compare two types of connections, namely DVI and VGA, on a number of issues. Towards the end of the article, we discuss which connection facilitates better resolution as well as our final thoughts on the future of display connections.

Quick Navigation
An Overview – DVI VS. VGA
Which Connection Has Better Resolution?
Incompatibility Issues – DVI VS. VGA
Tips For Connecting Source To Display
How To Research A Cable
Our Final Thoughts On The Future Of Display Connections

An Overview – DVI VS VGA Both connection types require separate audio cables if you want audio to be available on the display device. 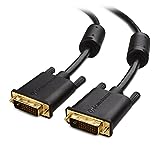 DVI is often considered the successor to VGA connections. DVI connections were initially produced in order to create a standard for digital video content, making them a more modern technology than VGA.

Which Connection Has Better Resolution? Strictly speaking, neither connection guarantees a specific kind of resolution on the display device. The resolution that results is a function of many factors which we will discuss in this section.

The resolution on a display device is primarily a function of how many pixels can be theoretically displayed. Resolution is usually conveyed using two numbers which refer to the number of pixels that are displayed horizontally and vertically. For example, a resolution of 1980 x 1080 means that the display has 1980 pixels horizontally and 1080 pixels vertically. Multiplying these values together, you can determine that the screen has over 2.1 million pixels of color in total.

The more pixels that a display has access to, the sharper and more realistic the picture quality will be. The main point of a connector like DVI or VGA is to transmit the pixels from the content on the source device to the display device, which will display these pixels on its monitor to form a cohesive image.

In this sense, if you use a cable that has been cheaply made and has minimal insulation, the pixels that are transferred could be compromised. This will result in a poor-quality image, regardless of the type of connection you use.

Furthermore, the length of the cable you use will also impact the resolution that is displayed. Longer cables require pixels to travel for a longer period of time, which introduces more possibilities for noise interference.

One way in which noise can enter your signal transmission is through crosstalk. This occurs when the signals in one cable induce unwanted currents in other cables. Since both VGA and DVI are typically paired with an adjacent audio cable, the possibility for crosstalk is likely for both connections.

Yet, DVI tends to be better at minimizing noise than VGA connections due to the more precise nature of digital signals. Furthermore, when using long DVI cables, a DVI booster can be purchased which enhances the signal transmission despite the length of the cable. Many users falsely assume that only one of these connections should be used at once. However, the diversity of ports available on modern devices often requires that users use adapters that take advantage of both DVI and VGA connections at once.

For example, some users have modern televisions which only have DVI ports. Yet, these users want to connect a modern laptop to the television which only has a VGA port. Thus, the user will need to buy a VGA to DVI adapter that converts the signal from digital to analog and then back again to digital. Yet, this conversion can compromise the pixels that are transferred, often leading to poor image quality.

In this sense, keeping the connection you use consistent across devices is one way of optimizing your screen’s resolution. Some customers, however, don’t have this level of flexibility, as their devices might only have one kind of port. Yet, if you’re able to connect VGA to VGA or DVI to DVI, then this will usually result in a cleaner connection, as less conversions will need to take place.

Furthermore, anytime a pure VGA connection is used, at least one conversion will still have to take place, namely from the digital way your computer processes the video to an analog signal that can be transmitted by the VGA cable. In this sense, many users consider DVI connections sharper and cleaner since they’re able to transfer digital videos without compressing to analog.

However, some DVI connections can compress to analog if that’s what you need. For example, the DVI-A cable is ideal for connecting a source device to a CRT (Cathode Ray Tube) monitor. DVI-A cables convert from digital to analog in this case, which could introduce noise into your signal.

DVI-D and DVI-I cables also offer the possibility for a dual-link format, which results in a higher data transmission rate. This is often desired when connecting to a large monitor, as any compromise in picture quality will be more apparent on larger screens.

Tips For Connecting Source To Display

When considering DVI vs. VGA cables, there are many tips that customers can keep in mind that will ensure a smooth buying process.

First, we recommend making a list of all the ports featured on your source device and display device. This will make finding the right cable much easier, as you will know before you start searching for a cable the precise limitations of your devices.

Some customers wrongly assume that one of their devices has a certain port, leading to the purchase of an incorrect cable.  Not only can this mistake be costly if a refund is not offered, but it can also be inconvenient. Just imagine a couple who finally settles down for the night to stream a film, only to find that their television doesn’t have the right port for the cable they are using.

This could ruin the night and potentially prevent the couple from bonding over a movie. Even if the correct cable can be acquired in the same night, the film-viewing experience will likely still be permanently tarnished in some way.

How To Research A Cable

We also recommend researching the cable you’re considering before buying it. While this might seem obvious, many customers end their research the moment they figure out the kind of cable they need.

Even though this is an important first step of the process, it’s not the only step. You still need to choose a particular product, and all display connections are not created equally. Some companies utilize more durable material to insulate the cable which minimizes noise interference and maximizes the longevity of the product.

One of the best ways to research a cable is to look at customer reviews online. These offer first-hand testimonies as to the specific quality of a product, allowing you to better determine if the price of a cable is warranted. Some cheap cables offer a compromised connection while other cheap cables rival some of the most expensive cables on the market.

Additionally, you might consider the benefits of purchasing a streaming stick or an entirely new smart television instead of a DVI or VGA cable. These technologies allow you to stream content from the internet wirelessly, which can be more convenient than connecting a cable every time you want to stream content. This is especially the case if your home entertainment system is already quite complicated with many wires.

Our Final Thoughts On The Future Of Display Connections

We think wired connections are already becoming obsolete but will be totally eradicated in the near future.

Currently, wired connections are preferred over wireless connections in some applications like gaming.

Yet, we think wireless connections will become so advanced in the future that they will be reliable even in intensive gaming environments.

Eventually, we think all computers will be inserted into our bodies. Thus, when we want to stream content in the future, the display device might actually be the back of our eyelids rather than an external monitor.

In this sense, future signals might be transmitted by our arteries and veins in literally the blink of an eye. While this future might seem unrealistic to some, we actually think it’s right around the corner.